Planning for the Anegada Passage

The weather was ideal to set out to Saint Maartin at the moment we arrived back to the boat at Trellis Bay, Tortola, on December 30th at about 8 PM.  The winds were on the nose but only about 7 knots with 4 to 6 foot seas - no breaking waves.  It would have been a 16 hour motor-sail across and we would have been there.  But after a two day trek to get back to Blue Pearl from Vancouver, we were only in the mood for a few drinks and a good sleep.
We spent a couple of nights at the Marina at Nanny Cay and said goodbye to Al and Maria from there. Since then we have been watching the forecasts, looking for something promising.  With the comfort of AC, Glen installed our new Standard Horizon 2150 AIS radio.  AIS stands for Automatic Identification System.  All big commercial boats are required to have an AIS transponder.  If we see someone who looks like they could run us over, it is a simple process - press a button - to contact them so they can change course or tell us to get the heck out of the way.


Glen tested it the other night when "The World," was anchored near us at our spot in Cane Garden Bay.  "The World" is a cruise ship owned by the passengers.  So I guess the "strata" decides where and when they will cruise.  I expect that the cabins (there are 167 of them) cost quite a bit more than chump change.

Apparently pressing the button causes all kinds of alarms to go off on the bridge so the officer in charge wasn't all that much fun to talk to.  He chuckled a little when Glen told him that we just installed the radio.  He said, "Well, it works!" 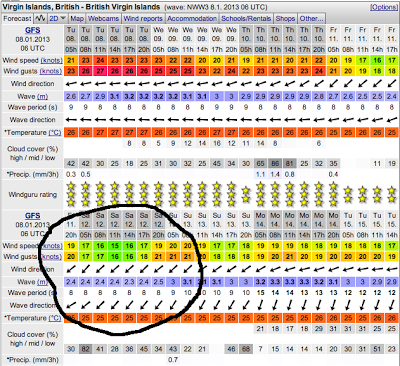 As you can see, Friday night the winds are 19 and 20 but die down a bit early Saturday.  The important thing is that the direction is almost north-east.  We are going slightly south of east so we might be able to pull off a close reach.

The waves are 2.4m (about 8 feet) and coming from side - not bashing straight into the boat, slowing it down to 2 knots each time we crest.  Also, the wave period is 8 seconds so the boat can go up and down a wave rather than crashing into them and burying the nose like we do when the waves are closer together.

In a couple of days we will move up to Leverick Bay at the north-east of Virgin Gorda.  We will set off with a reef in the main and let it out later if it seems prudent.  We will start off in the late afternoon on Friday so we can arrive sometime Saturday morning.

So that's the plan.

Until then, we snooze, do small jobs, swim, drink and wander around ashore.


Posted by Roger Family Sailing Adventures at 8:40 AM