Safe and Sound, Back in Antigua

Our trip back from Dominica consisted of a 20 mile run to Les Saintes, a 30 mile run to Deshaies and then a 40 mile run to Jolly Harbour in Antigua.  At each of the stops we had a great time, saw nice folks and had great walks.  During each of the voyages, Pam gritted her teeth and stared at the mast, convinced that it was going to come crashing down.

We travelled on low wind days and only put up a little jib to stabilize.  Yan Diesel performed brilliantly and got us here without incident.


Ed and Ann told us about this cool hike up and over a hill at the end of the beach.  Ed said it was a scramble but doable.  So we did it.  Just about killed us.  It was only 200 meters in altitude but straight up and rocky.  Of course it started to rain so it was slippery, too.


Our German kids from last year are settled into jobs at home in Germany and are taking their first vacation... so back down to the Caribbean to visit friends they made during their Atlantic crossing.  They went out of their way to come and visit us... great to see them!!

So Pam is getting ready to go home.  I'm starting to fuss about the boat.  I've got a plan - hoping to live on the boat while the work gets done.  If it gets too ugly I've got options.  Several boat friends have offered a bed and there is a guesthouse near North Sound Marina.  Jolly Harbour would be a better place for groceries and transportation but we really liked Leon the fiberglass guy at North Sound so we are going there.

I'll keep you up to date!

Will take lots of photos.
Posted by Roger Family Sailing Adventures at 7:09 AM No comments:

Time to leave Dominica.  There is a moderate-wind day tomorrow which will allow us to get up to Les Saintes.  We’ll hang around there and visit with Quest and then hug the shelter of the coast of Guadeloupe to get us up to Deshaise.  We'll stage from there to get back to Antigua.

We love this place.  Might be our favourite island.


The last few days have been really great!  Even though Azaya deserted us a couple of days ago, Mickie and Shane from “Virtue and Vice” came in.  Lovely couple… we always have fun with them.  We kind of bonded with them during our time in Luperon at the beginning of our Caribbean Adventure.

We had fun at “Carnaval” - which consisted of two trucks piled with massive speakers belching out some kind of sound.  BUT, we ate road-kill and drank lots of beer so it was fun.  Met Phil whose dad lives in Surrey, 30 miles from home.  He says he is coming to visit this summer.  Might even make it to the Pig Roast!


When we chartered down here years ago with our kids we took an “Indian River Tour” which turned out to be a bit of a bust.  A guy poles you a mile down a river in a river boat, you get to a shack and have some bad food and… that’s it!  So we’ve been resisting but today, along with Xanadu (Jack and Linda from Toronto) and Moody Blues (Gene and Suzie from Friday Harbor) we caved and did the tour.  AND, it was really good.  This time we had a great walk through the forest and then into a local farm.  Had some dynamite rum punch and learned all about the local bush medicine.  Our guide, Sammy (AKA Dinosaur) was awesome.  Started out quiet.  Maybe a little shy... but by the time we got to the grotto he'd found his voice and was great.  Then, we had a couple of rum punches and you couldn't get a word in edgewise.  Highly recommend Dinosaur.

So we are enjoying our sundowners, putting off getting the boat ready for our trip tomorrow… AND GUESS WHAT?  There’s a whale in the harbour.  Right close to the boats.  No, really!  And then this awesome sunset!

So we’re going to post this, stow the dinghy, put everything away and tomorrow morning we are back to France (Ilse des Saintes.)  YAY French wine, cheeses, baguettes, weird animal pate, mussels and speaking french.

Good thing we are fluent and can enjoy scintillating conversations with the locals!
Posted by Roger Family Sailing Adventures at 2:45 PM 2 comments: 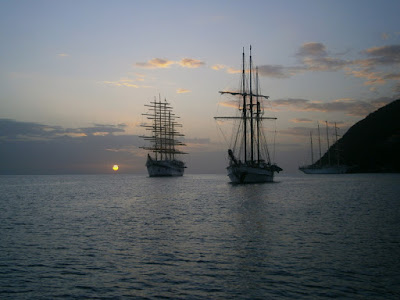