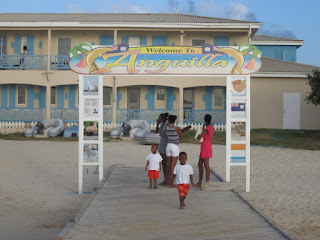 Anguilla is only 15 miles north of St. Martin so it is easily accessible.  We had a great beam reach for 10 miles north and then had to beat into the wind for the last 5.  Some purists sailed, heeled over, almost broaching in the gusts.  We dropped our jib and motor sailed - keeping Pam happy so Glen can continue to cruise in the Caribbean.

Clearing in is a breeze.  The folks are very professional and the fees are quite reasonable - nothing.

We were with cruising buddies on Southern Cross IV and joined them for drinks at Elvis' Bar - a beached, wooden sailboat.  Elvis' is written up in Caribbean Life magazine and it was very nice.  We have to say that his rum punch was average… ours is better.

We intended to go for a walk when a taxi driver stopped to see if we wanted a lift.  We said we were just out for exercise and he offered to drive us to the main road.  Once there we realized that Sandy Ground is a long way from anywhere.  We talked to him about the Jimmy Buffett concert - he said he was there - just like Glen was at Woodstock - and so off we went to the Dunes - owned by Bankie Banks - who was featured in the concert.  The place is like the treehouse in the Swiss Family Robinson - stairs leading everywhere in a place built from old sailboats, driftwood and tarpaper.  We recognized the concert stage and were amazed that they were able to fit 3500 people into the space available.  Amazing.  But a really good concert.  You should watch it.  We'll lend you the DVD.

So that took about 20 minutes and we weren't sure what to do next… so we asked our taxi driver to take us to Blanchard's Beach Bar.  If you've read the book, "Trip to the Beach" you will recognize the name.  They have a very exclusive restaurant where people like Glen and Pam would have to dress up in clothes that aren't on the boat.  BUT, they have recently opened a beach bar next door tailored exactly to what we wear. We had a great hamburger and fish tacos - should have ordered fries because they were the home style - fresh potatoes cooked in boiling oil - yummmmmm.  The place is immaculate.  Most beach bars are grungy and slightly off-putting with kitchens that might not pass standards at home.  Not that there is anything wrong with that!!!  As a matter of fact, that is the kind of place that Glen gravitates to.  But this place had the buzzing hockey pucks to call you when your entree was ready, really friendly helpful staff, unbelievably clean and great food.  Glen asked if anyone in the place was an original from the book and our order-taker told us he was Lowell - you'll have to read the book.  We'll lend it to you.  Very cool!


We probably should have bought a car - but instead our taxi driver returned for us and for slightly less than a mortgage payment, dropped us back at Sandy Ground in Road Bay.  GREAT DAY!


We spent some time working on our staysail.  It is 20 years old and was beaten up on our trip from Virgin Gorda to Saint Martin.  A new one is $1150 and then there is the problem of getting it to the boat… so SuperSewer Pam stitched it up.  We think we can get another year out of a 20 year-old sail.

We were going to go back to Saint Martin and then onto Saint Bartholomey but we looked at the check-in/check-out nonsense and decided that we will go straight to St. Barts from here on Sunday.  Winds are supposed to be favourable and the trip is 32 miles.  There is a big blow forecast for later in the week.   Current plan is to weather that in Saint Kitts and then proceed to Monserratt and Antigua.

Having a great time in very nice places!!!

Posted by Roger Family Sailing Adventures at 7:40 AM