Old Macdonalds Had a Trip

After waiting outside SJU for 20 minutes we finally saw two familiar faces - happy but maybe a little tired from travel.  We loaded them up and drove from San Juan across to Humacao where the boat waited at the Marina at Palmas del Mar.

We spent the rest of the day keeping cool at the pool and enjoyed Pam's tacos for dinner.  Then a final blissful sleep in the cool of Blue Pearl's dockside AC and off we went - a marathon (OK only 4 hours) trip to Tamarindo Beach on the west side of Culebra.

Moments after taking a mooring we were in the water to snorkel and just cool off.

Don decided that the boat was too hot for sleeping so he decided to try the cockpit.  Apart from a couple of drops, the night was relatively dry.

Next day we moved the boat around to Dewey and went for a short, hot walk around town.  Apparently the tourist season hasn't started because not many of the stores and restaurants were open.  The social hub of the town, El Batey's was so we tucked into Medalla beers, Batey burgers and grease with fries.  Mmmmmmmmmmmmm. 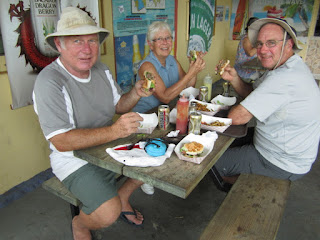 Then back to the boat and out to Dakity so we could get off early to Saint Thomas.  Next morning we enjoyed a quick breakfast and set out to Brewers Bay, by the airport in Saint Thomas.  There wasn't any wind for the rest of the day - very still and hot - but during our trip we had 15 mph on the nose which made for a bumpy crossing.  That's usually the way it goes - the wind is coming from where we want to go.

We went to shore to enjoy the last of the VI Agricultural Fair - some great music, food and crafts - and then back to the boat to listen to overwhelmingly loud gangsta rap from a beach party.

Another blissful night on the boat - once the music stopped - with good friends and cool drinks.

Today we adventure around the island in a rental car.  More later!
Posted by Roger Family Sailing Adventures at 4:13 AM