Toes in the Sand

So here we are – with our toes back in the sand in the Bahamas.
Just before we packed up from Stuart we ran into Barry and Susan from Nighthawk.  They live in Chilliwack and although we had never met them we’ve seen their boat in previous years.  Once in awhile they shop at Clancy’s on Whatcom Road near Abbotsford and had talked to the owner (Mike!) about sailing in the Bahamas.  Mike said he has friends (us!) who sail the Blue Pearl in the Bahamas and they said, “Oh yeah, we’ve seen the Blue Pearl!”  So it was kind of cool to meet them standing near the fantastic boaters’ lounge at Sunset Bay Marina in Stuart.


Now, at the risk of running on at the mouth – we love Stuart.  The old town has such character and like so many other Florida towns, the A1A is dotted with malls so you can get any thing you want.  Lots of folks get their boats in the water at Indiantown and just come down the river for several months at Stuart.
But our path takes us far beyond Stuart and so on Wednesday we set off for West Palm Beach.  We try to avoid the Intercoastal Waterway as it is boring and obstructed with bridges that have to be waited for, and then passed.  This, though, might have been a better route than the one we chose.  The waves weren’t big but they were spaced just nicely enough to keep the Blue Pearl significantly under 6 knots and so we banged and crashed our way to the WPB inlet – rather then glide down the boring ICW.  Boring is better than crashing.
Anyway, we gassed up and headed over to our spot, just south of Peanut Island, prepping for our 4:30 start the next morning.  We connected with Doug and Lisa on Carefree over the radio.  They had never crossed and were comforted to go with such seasoned veterans as us.
So we left at 4:30 – crossed without much fuss – and arrived at West End at 2:30.  (Check our SPOT locator to see our check-ins along the way.)  We had to motorsail.  The wind was light and variable but that is what a “weather window” is – an opportunity to get across with a minimum of discomfort.

Checking-in was easy – we asked for and received a 180-day Bahamas cruising permit and then settled in on the Blue Pearl.  Glen borrowed a marina bike and rode down to the settlement to buy conch salad.  While he was waiting for the salad Bumpy and his son drove by so Glen’s mission was interrupted with several Kaliks (local beer) and stories.
After a game of crib, which Pam won by cheating, we had a delicious jambalaya, several glasses of wine and Glen fell asleep on the couch – just like home!!!
Within hours of tying up, the weather window slammed shut and we were whacked by a front with 35 knot winds. Glen reminded the marina staff of the Daring Rescue At Sea last year and received a $10 per night discount.  So we will sit here and wait for a couple of days.  We’ll check to see if John Travolta is at his West End home and head back down to the settlement for more conch salad. 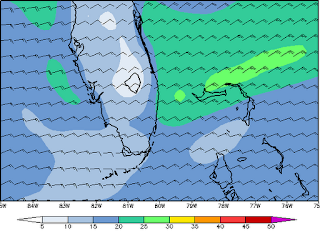 After the front, we will head to Freeport to visit Bumpy and his family and then continue further south.
Posted by Roger Family Sailing Adventures at 7:04 AM