We haven’t had great internet so blogging has been a challenge.

After leaving the security of Jolly Harbour Marina we chugged around to Hermitage Bay with our new electrical system. Over the next few days we fiddled around with stuff, getting used to our new systems. Pam has managed to tidy the boat up so it is quite pleasant and the “garage” (the aft cabin) is becoming less cluttered. All the the parts and crap that were stored in there and the parts and crap that I brought down in my luggage have been installed, put away and generally getting to the spots where they belong.

Hermitage is quiet and that’s just what we needed to concentrate on our chores.

After a couple of days, and realizing that we could exist off the dock we moved to Carlisle Bay, which has been another favourite place. Continued with getting things organized but had problems with their usually excellent internet.

So after a couple of quiet nights we decided to move to Falmouth Harbour with it’s wealth of services and shopping. Problem here is that there really is no good internet in the harbour so we have to go in somewhere and buy a beer to connect. Darn.

The Salty Dawg is a rally that starts on the east coast of the US and winds up here. The early boats have begun to arrive so there is plenty of activity as boats celebrate their 1500 mile journey. Lots of parties. 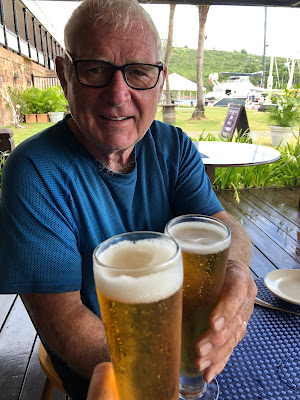 One of the sides of the cockpit coaming was quite damaged by the Caribbean weather so we stripped the teak down to bare wood and are in the process of building back layers of varnish. We’ve managed to rig the sails the way we want for any upcoming passages and managed to test everything on our way to Falmouth. The nav computers are working well so we won’t get lost. “Captain Ron: If we get lost we’ll just pull in somewheres and ask directions.”

So, the boat’s ready for a passage. But we’re not. We are excited about heading home next week to hug kids and grandkids. We’ll haul the boat so we don’t have to worry about whether it’s sinking in our absence and launch again when we get back. Not taking down any canvas or sails. Leaving some rum on board for libations when we return.

After the New Year we’ll figure out what distant horizons are calling!

Posted by Roger Family Sailing Adventures at 10:54 AM