Had a lovely get-together with Richard and Jan from Morpheus of London.  We are both juggling guests so we only had the one day.  Had some sundowners, lovely conversation and a great dinner.  Nice!

So we decided to rent a car and go pick up Brad at the airport.  The car was the size of a large pumpkin and the AC didn’t work.  We had done a great deal of studying to get down to Hewanorra, including downloading maps on the iPad, searching out a map in the local community and checking out google maps.  Very confidently, we left Rodney Bay and promptly got lost. 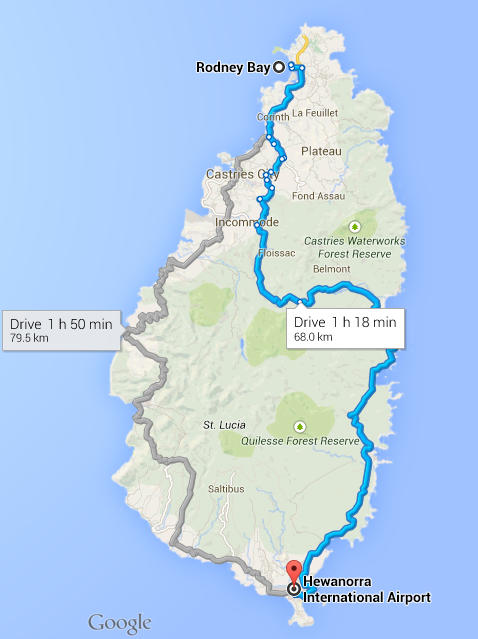 We drove past several of the places we had been with Mike and Charlotte and at one point decided to ignore  a ROAD CLOSED sign to see where that led.  Turns out, the road was closed because it ended at the edge of a cliff with nowhere else to go.  Google Maps was way off.  It wanted us to go somewhere that didn’t exist, the iPad map program had completely different ideas.  After about 45 minutes we finally emerged from the hills onto the highway that would take us to UFV (Hewannora) near Vieux Fort.

Got to UVF in plenty of time so Pam decided that we needed to get some groceries.  We found a Liquor and Grocery outlet but that turned out to be liquor with an aisle of canned weiners and beans.  But the prices were spectacular so our livers will continue to suffer.

Great to see Brad as he burst through the Customs and Immigration doors and off we went in our Pumpkin Chariot back to the Blue Pearl.  Stopped for a coconut to wash down the ham and cheese baguette super mom Pam had purchased for him.  Back at the marina we purchased a few things and then lurched into the dingy to retire to the Blue Pearl.  Had a quick swim and a delicious burger by chief cook Pammy.

Might have seen the elusive "Green Flash" after the sundown.  We are skeptical.

Brad had worked a 14 hour shift, flown a red-eye and arrived a little bleary so he was perfectly pleased to have an early bedtime, especially after a couple of nightcaps.


Today we had a lazy morning and wandered about the marina collecting essentials like baseball caps and tonic.  We are fueled, watered, checked out and ready for Martinique in the morning.